In Cambodia, a lot of people call these fish trey sor. That literally means “white fish.” The same name is used for some other fish too. So it isn’t very specific.

On top of that, there is already a species commonly refered to as “white fish” in English. I’ve caught those while fishing Saint Mary Lake in Montana. They are a lot different than parasikukia maculata!

What are these “white fish”?

Before I tell you more about these fish, I want to let you know that I may earn commission when you make purchases through links on this page. This commission helps support my website, but it does not influence what I write.

I haven’t seen much written about parasikukia maculata anywhere. The species isn’t mentioned in Walter J Rainboth’s book “Fishes of the Cambodian Mekong” at all. There is some information on the internet but it is rather limited. For example a research paper published in November 2000 describes the fish as “a New Genus and New Species of Cyprinid Fish from Peninsular Thailand.” Fishbase gives it a brief description and references the same paper.

I have encountered parasikukia maculata quite a bit while fishing in Cambodia. They’re not a common fish in the aquarium trade which explains the dearth of information about the fish in English. They are a somewhat common food fish in parts of Cambodia however. I don’t know that anyone seeks them out specifically. Though people do seem quite happy to keep them when they catch these fish along with other species like silver flying fox and mystus catfish.

How to find and identify parasikukia maculata

As I said there isn’t a ton of info about parasikukia maculata floating around out there. I only found about the fish after I caught it. My research led to me the name. That’s when I discovered the lack of information about the fish. It is apparently relatively new to science. But none of the people I fished with in Cambodia were ever surprised to catch this fish.

Parasikukia maculata are small fish that could accurately be described as micro species. They max out at a whopping 1.5 inches (3.8 cm). Nearly all the parasikukia maculata I’ve caught were between an inch and an inch and a quarter in length. They look like a lot of other silver colored barbs you encounter in Southeast Asia. The main defining features that make the fish somewhat easy to identify are the two black spots found on the body. A “saddle spot” is found at the base of the dorsal fin. The other spot is found at the base of the tail.

I’ve caught parasikukia maculata on the slow edges of streams and canals. I have also found them in still water ponds left over after the rainy season. I would guess that they move around when the water is high like a lot of other fish in the region. Then they get stuck in the ponds when the water levels start to recede. They are somewhat common in these kinds of waters.

How to catch parasikukia maculata

Although they are small, parasikukia maculata can definitely be caught on hook and line. I’ve caught quite a few in Cambodia. Others fishing alongside me have caught them too. It’s possible to catch the fish with traditional tackle scaled down to the smallest available size. But specialized micro fishing tackle works best when trying to catch these little fish.

I’ve caught parasikukia maculata on a variety of baits. You only need enough to bait a micro fishing hook. That basically means the smallest possible piece of bait you can find. In my experience, parasikukia maculata will eat pieces of earth worm, Gulp! Maggots, pieces of bread and dough baits. In other words, these are opportunistic omnivores that will eat a wide variety of things.

Ever parasikukia maculata I’ve caught has come from slow or still water. In flowing waters like the main stream flowing out of West Baray in Siem Reap I’ve caught them near the edge. They typically sit just a foot or so from the bank in the slower flow of the margins. In other still water ponds around Cambodia I have typically caught them in the shallows around vegetation. This is a clear pattern that tells you where to start if you are looking to catch these fish on your own. 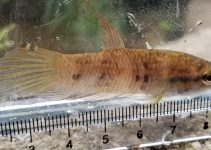 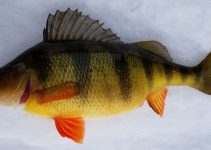